peterdean.co.uk
Introduction
The Wye Valley Line from Coleford to Newland once ran down the bottom of my garden, but that was long ago. There's no sign of the track now except for the sleepers which are being used for fencing, but the cutting is very clear and now acts as a driveway to a house. This is one of the many things which inspired me to trace and record the original tracks. Others include the tunnel at the Wye Valley Ghost Train geocache and the old bridge from Redbrook to Penallt, to name but a few. The local area comprised of the Wye Valley Line, the Severn and Wye Railway as well as the GWR Forest of Dean Branch and lines from Ross-on-Wye. These lines served local mines, works, quarries and passengers.

I must point out that I am not, and never have been a railway enthusiast. I approach this project from a mainly walking viewpoint, with some historic and architectural interest thrown in. I was the kid who had Scalextric and thought his brother's train set was really boring.

Ordinance survey Explorer maps show where some of the tracks lay, but the trail tails off in places. The first map I came across was this one, which came from urban75.org. It's very simplistic, and it's pretty clear that I'm going to need a lot more than this to guide me round the actual route, but it's a start.

The next resource I found was Vision of Britain. Here there are maps from the 1930's and as these railways operated from 1860's to 1960's this seemed a good resource. The detail's not great, so I don't plan to stop there. I mean to visit some local book shops as soon as possible in Coleford and Lydney and possibly the station shop on the reopened Dean Forest Railway at Norchard, which I seem to recall stock loads of train related books from my visits there with Will whilst visiting Thomas the Tank Engine a few years back.

I've now acquired a A3 Midland Railway Distance Diagram from 1917 and a huge map (1 inch:1 mile scale) of The Railways in Dean Forest from 1880. This also marks the tramlines, mines, works and collieries of the day.

Newland Station has been converted to a house, which has ensured the building remains quite true to it's original state from the outside. Both of the level crossing gates are still in place and are an impressive sight, as there is little memorabilia still in place. I now have a large sepia, framed photo of the station from it's heyday. 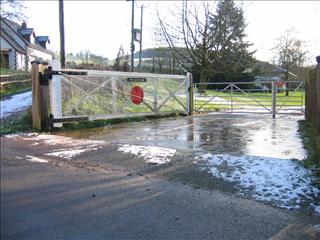 Disclaimer. Do not assume that I have walked all sections indicated on maps, described in text or portrayed in any other way.